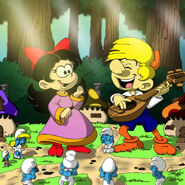 While coloring this old profile image, I was listening to Imagine Dragons's "Radioactive" on replay.

The original colored version, which was later renamed to edit the glasses slightly.

How hard is it to remember the most important Smurf in the village: Brainy Smurf? Colored on Nov. 10th, 2020. 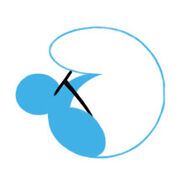 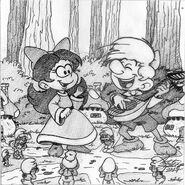 In the new Sony style, Brainy takes on the most intriguing persona - not to mention such fluidity in both limb and lip. Drawn on Feb. 12th, 2014.

I could go on for quite some time describing the symbolism of this image, but I won't. Drawn on June 30th, 2014. 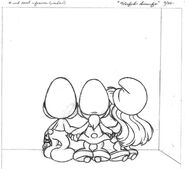 While making an illustration for "Woeful Smurfs," I got stuck on drawing the hovel from a specific angle and never finished this sketch. Drawn on Sept. 22nd, 2014. 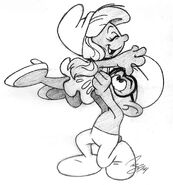 He is more than happy to give Smurfette private dance lessons; after all, she needs practice to be smurfy at it! Drawn on May 15th, 2014. 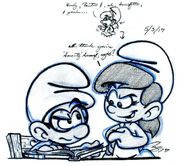 They're either climbing up or down this rope. Either way, Brainy needs to chill. Drawn on Nov. 5th, 2014. 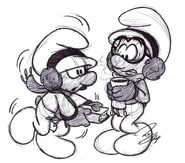 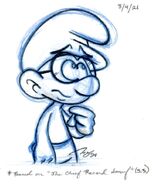 Based on a keyframe pose in the Season 3 episode, "The Chief Record Smurf," in which Brainy says, "But, Papa Smurf," in a deflated whining tone. It serves as inspiration for a key pose during one scene in S5E17 of the LD Stories. Drawn on Aug. 4th, 2021.

This is the initial sketch of Brainy's swimming attire, but it'll be redrawn later. Drawn on March 19th, 2013.

Loosely based on the picture of Smurfette and Gutsy from "Smurfy Hollow," but with more idiocy. Drawn on Feb. 20th, 2014. (This sketch is so small, I accidentally trimmed off half my signature.) 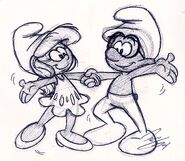 This was the initial doodle I made for the "Smurfette and Brainy dancing" concept. Drawn on June 5th, 2014.

Brainy, you coward - those are your friends! Crazy little Smurf...

I still need to work on his posture when holding books. Drawn on March 14th, 2013. 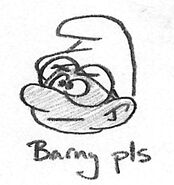 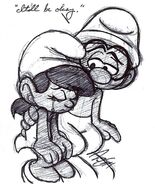 Originally this was a snapshot for "Woeful Smurfs," in which Brainy offers Moxette a shoulder to cry on since she was so hurt by learning about Johan's fall. Drawn on Aug. 17th, 2014.

I really like this one because it goes into an even progression right-to-left. Far left is boredom, Brainy is contemplation, and far right is depression. Drawn on Sept. 15th, 2014.

How have I not posted this by now? Brainy attempts to prove he's accepting of Moxette's insane happiness about being human by writing her a book called, "How to be Human." Looks like she won't be needing it, though. Drawn on April 4th, 2014. 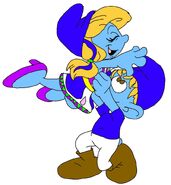 Jack.mac.334 used my sketch to have Sapphire and Jadan dancing together. 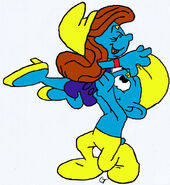