"Days Of Auld Lang Smurf" is a Smurfs fanfiction story that takes place in the EMPATH: The Luckiest Smurf story series.

This was a completely new story that Vic George has written in 2007 following a several-year gap between that and previous stories that were written. It is the first holiday-oriented story of that series that was completely written. The story idea started off as a sort of ghost story where the Smurfs reunite with the ghosts of their parents around New Years' Eve. In 2013, Duncan McSmurf was added to the story along with his father Angus. 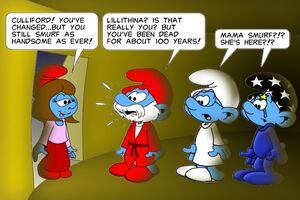 As the Smurf Village gets ready for the New Year's Eve celebration, most of the Smurfs find themselves reminiscing about the parent Smurfs who had passed away years ago, whom they had forgotten until Papa Smurf had revealed the truth about Empath's origin of him being the only begotten son of Papa. Even Papa is found by Empath in the Imaginarium, spending his hours with a fantasy version of his deceased wife Lillithina because he misses her so dearly.

Chlorhydris the evil witch watches this through her magical telescope and decides to cast a spell on them that would further destroy the relationship the Smurfs had with their adoptive father Papa Smurf. One night Empath and the other Smurfs were treated to a mysterious resurrection of the parent Smurfs, which gladdens their hearts to the point of having a morning celebration brunch put on by Greedy and his father, Baker.

However, Smurfette, Polaris Psyche, and the Smurflings discover that this "resurrection" is actually just an illusion when they see the Smurfs interacting with nobody they can see, but they are unable to convince the other Smurfs that what they're experiencing is just an illusion -- until Baby Smurf ends up casting a counter-spell on Empath and Papa Smurf that makes them finally see the "resurrection" for what it really was.

Despite Chlorhydris' intentions, the "reunion" has caused all the Smurfs in the village to reforge their relationship with Papa Smurf as him being "the one and only Papa Smurf" in their lives.

Retrieved from "https://smurfsfanon.fandom.com/wiki/Days_Of_Auld_Lang_Smurf?oldid=166564"
Community content is available under CC-BY-SA unless otherwise noted.