The colored version, which is the author's first digital piece.
Add a photo to this gallery

The flat-color version (no specialty shading).

One of my projects for a class in my BSA program was to draw a Saturday Morning cartoon character using only the pen tool in Illustrator. Naturally, I chose Falla hinting towards her future design in either the end of Season 11 or into Season 12. Drawn (digitally) on March 12th, 2017.
Add a photo to this gallery

Falla's black heels from Story One. Colored on Sept. 14th, 2014.
Add a photo to this gallery

Johan lends Falla his cape while explaining the known history of the Smurfs. Drawn between May 31st - June 2nd, 2011.

This is the traditional sketch of the RDK cover page. (Falla is located bottom, left corner.) Drawn between Feb. 7th - 14th, 2012.

Her dress is chic, yet functional enough to suit her needs - not to mention slimming! Drawn on Feb. 6th, 2014.

This pose is the definition of her entire character, and I am proud to be developing her personally. Drawn on Feb. 13th, 2014.

Version 2.0 of her royal outfit from the Season 10 Finale. The major difference is the shape of the shoulder straps, a choker instead of a necklace, and no earrings. Drawn on March 10th, 2014.

One of several snapshots for "Falla's Birthday;" Despite her strong nature, Falla respects her traditional role by lowering herself slightly. Drawn on April 6th, 2015.
Add a photo to this gallery 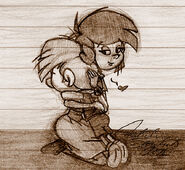 Falla acts as a mother figure to Peewit, made obvious here while she comforts him from a scare. Drawn on Oct. 18th, 2011.

Falla thinks King Gerard's adorkable half the time they're together. And I love drawing chibi versions of them. Drawn on Nov. 15th, 2011. 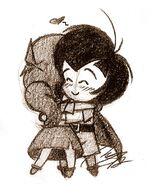 I think she looks better older. Still, she actually did have a crown until she ran away and left it behind. Drawn between Feb. 1st - 15th, 2012.

Third sequel is when Falla is happily married, but I'm not yet sure if she'll have her first child yet. Drawn on Feb. 22nd, 2012.

In the third sequel she and Theo establish a strong friendship and she agrees to help him when he needs it most... Drawn on March 20th, 2012. 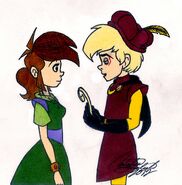 A closer depiction of her when she is first introduced into the storyline, but a pen sketch is still just a concept. Drawn on March 14th, 2014.

A first attempt at drawing full-body lady armour on my main femme. I haven't thought of a helmet yet, but I like the braid; she looks like a Viking warrior with it. Drawn between March 17th - 19th, 2014. 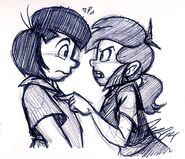 A snapshot of her first encounter with Johan in Story One. Drawn on April 17th, 2014. 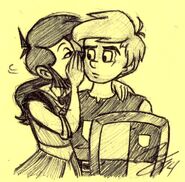 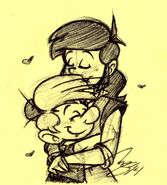 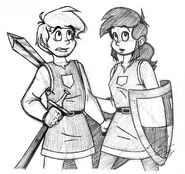 I'm pleased with how her tunic drapes over her chest, and that it's otherwise exactly the same as Josten's. Drawn between May 27th - 30th, 2014.

I drew these during class with only my computer screen for light, and this is a picture off my new phone. Drawn on April 6th, 2015.

Going from right to left, these are some practice sketches for three emotions: Shock, Bemusement, and Disregard. Drawn on Jan. 3rd, 2015.

I also made a clean trace version of this sketch, but I think I'll color the rough version anyway. Traced on March 14th, 2015.

This is a snapshot for "Somebody's Hidden Talent;" I started this at work one day, but later discovered it had been moved and no one told me, so I thought it had been thrown away like one of my previous works. Apparently my co-workers thought it portrayed something more graphic, but I could have made it clear had someone ASKED ME FIRST. Drawn between Feb. 22nd - March 14th, 2015. 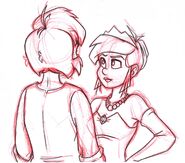 Falla's expression reflects a sense of cautious interest, like she's looking for her friend. Drawn on April 6th, 2015. 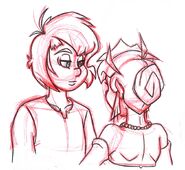 I finally got around to giving her "Story One" profile an update, and you'll notice I've redesigned her top. I felt it was a more renaissance design when compared to her former look. Drawn on May 3rd, 2016.
Add a photo to this gallery

On the right side is King Gerard and his Queen, Falla.
Add a photo to this gallery
Retrieved from "https://smurfsfanon.fandom.com/wiki/Falla_Cye_(LD_Stories)/Gallery?oldid=175145"
Community content is available under CC-BY-SA unless otherwise noted.