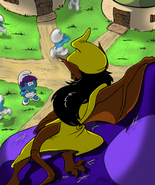 I originally colored this one day at my Starbucks home store, but when I opened it the next day, the file was corrupted. I lost everything and couldn't bring myself to work on it again until three years later. It was finally finished on March 29th, 2017.
Add a photo to this gallery 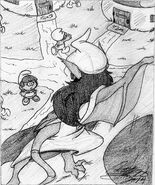 I decided to make the V2.0 of "Mystico Returns" as an alternate perspective, namely to show Moxette's reaction to a more dramatically re-introduced goblin foe. Drawn between April 8th - June 30th, 2014. 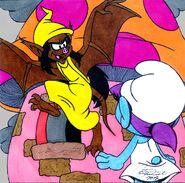 Mystico's latest profile sketch, which turned out much better than the previous attempt. I love the unkempt hair and new nose shape. Drawn on Feb. 24th, 2014.
Add a photo to this gallery

Practice of the moment where Mystico and Vira meet - this is her rough draft finalized. Drawn on Sep. 28th, 2011.

This is my first colored picture of Mystico - accompanying him (right to left) are Winky the Imp, Prince Pyro, and Princess Glacia. Drawn on Sept. 22nd, 2011.

Still haven't decided whether or not this is how their first kiss really is. Drawn on Oct. 3rd, 2011. 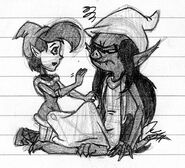 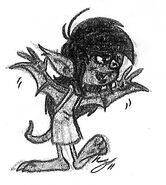 I attempted to draw him as a young child, but his hair's a little longer than I think it should be. Drawn on Nov. 9th, 2011. 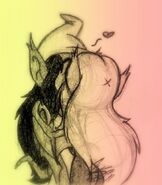 His first kiss with Hethera is far more memorable than it was with Vira. Drawn on Dec. 14th, 2011. 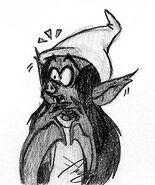 My mom bought glass goblets for me and when Mysty saw them, he made this face and bolted. So far, it's the best reaction he's made to anything. Drawn on Dec. 14th, 2011. 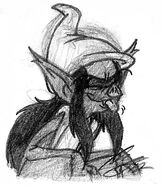 I've always wanted to draw him sticking his tongue out like a prick. Drawn on Feb. 16th, 2012. 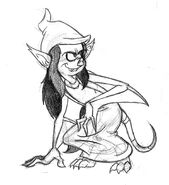 I'm not sure if this should be his new profile picture. I don't think it looks good enough. Drawn on Aug. 25th, 2012.

I'm not sorry for him looking like an unattractive girl. He did it to himself by wearing the robe. Drawn on Aug. 27th, 2012.

I'll never be completely satisfied, so this'll just have to do. Drawn on Jan. 23rd, 2013.
Add a photo to this gallery
Retrieved from "https://smurfsfanon.fandom.com/wiki/Mystico_(LD_Stories)/Gallery?oldid=177770"
Community content is available under CC-BY-SA unless otherwise noted.