"Papa's Big Crush" is a Smurfs fanfiction story that appears in the EMPATH: The Luckiest Smurf story series.

This was one of the first EMPATH: The Luckiest Smurf stories Vic George has written to follow the events of the novel. It was written as a response to Peyo's "Romeo and Smurfette" comic book segment and as a sequel to the cartoon show episode of the same name. Vic George's comment on the story is that he wanted to do a "stupid Hulk story featuring the Smurfs." The bulk of the story was written around the early 2000s, with some touch-ups here and there to expand the already short story. 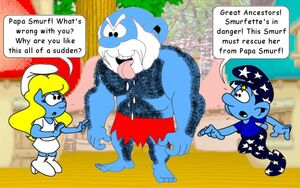 Around the same time that Papa Smurf's amorous feelings for Smurfette had resurfaced long after the events of "Romeo and Smurfette", Vanity was given a powerful "pheromone cologne" by his friend Periwinkle the Pixie for him to try out. Empath cautions Vanity that it may end up making him too attractive to everyone else if he wears it, so Vanity decided to turn over the cologne to Papa Smurf, who - after a fight with his conscience - decided to try it out. However, the "pheromone cologne" fumes mix in with the chemicals in his laboratory, creating a powerful fog that transforms Papa Smurf into a muscular, love-crazed, grotesquerie of himself who was now after Smurfette.

By having Brainy develop both a pheromone blocker and an artificial version of Smurfette's scent, Empath was able to lure Papa Smurf out into the forest where he purged those feelings through the use of a Smurfette doll, restoring him to normal. After Papa Smurf returned to normal, Smurfette told Papa Smurf that she couldn't love him like she would any other Smurf, but as a daughter she would still love him.

Retrieved from "https://smurfsfanon.fandom.com/wiki/Papa%27s_Big_Crush?oldid=170686"
Community content is available under CC-BY-SA unless otherwise noted.