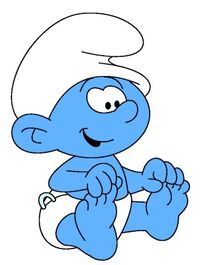 In mainstream Smurfs media, Smurf reproduction is non-physical, as all baby Smurfs are brought to the Smurf Village from an unknown location on the night of a blue moon by stork. Since the mainstream Smurfs are by nature a single-gendered race, natural-born Smurfs are mostly male, with female Smurfs being magical creations. Strangely in the cartoon show, Baby Smurf's gender is rarely if ever revealed in any interpersonal conversation among the adult Smurfs.

It is mostly inferred, though not illustrated or shown in any graphic detail, that humans and animals are the only creatures in mainstream Smurfs media that physically reproduce. In the 2011 Smurfs movie, Patrick and Grace Winslow are a human couple who were expecting their first child, a son named Blue, who is born sometime after the events of the story and is shown as a baby in the end credits and as a four-year-old boy in The Smurfs 2. 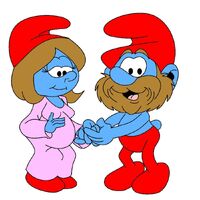 Smurfs in the EMPATH: The Luckiest Smurf story series can reproduce physically, since they are by nature a two-gendered race, with both genders having reproductive organs similar to that of humans. A young adult Smurf of 100 years of age is considered physically developed and capable of reproducing, although societal norms suggest that a Smurf must be at least 150 years old to marry and have children. However, despite that adult Smurfs may be physically capable of reproduction, their belief system holds that only Mother Nature has the power to allow conception to happen at her discretion during any act of sexual intercourse. Tapper, being more of a Christian than a follower of the Smurfs' belief system, claims that only the Almighty has the divine right and power to allow conception for all creatures capable of physical reproduction.

The normal gestation time of a Smurf from conception to birth during a pregnancy is usually around seven to nine months, after which they are delivered through the birth canal and nursed for about ten years until they can develop the appetite for solid food. During the pregnancy, the female Smurf may experience morning sickness and strange food cravings, and her mobility may be limited as the child inside her grows to at least 7/8 inch tall. Unexpected mood swings may also occur within females during a pregnancy. The birthing process is considered painful for most female Smurfs, though in the case of Empath's mother and eventually Smurfette (who were both carrying children with telepathic abilities), they experienced very little pain in the delivery of their children.

Although female Smurfs for the most part can only carry one child at a time during a pregnancy, there have been occasional twins that were born such as Hefty and Handy.

It is assumed that this universe's version of Peyo, who had his hands on the memory crystal that contained the history of the Smurfs, had purposely bowdlerized the account of how Smurfs reproduce for the sake of entertaining children with his fictional series The Smurfs by saying that the Smurfs reproduce by having male Smurfs be brought to the village as baby Smurfs from an unknown location by a delivery stork.

Psyche reproduction is mostly handled by the Psyche Master, as they are created from Smurf essence made from the Psyche Master's beard, and are put into gestation chambers for the same period of time as a Smurf pregnancy. However, the Psyches are given some level of accelerated aging during their gestation period that they will emerge from their gestation chambers as young Psychelian children. Because of this, all sexual and reproductive desires have been forcibly purged from all Psyches. Despite this, Polaris Psyche is the only known Psyche who has fathered a child during his life with the Smurfs, with his child Libra being both a Psyche and a Smurf.

The reproduction of the various humanoid species that the Smurfs come across is mostly non-physical, with the exception of humans.

In The Light and Dark Series, there are humans, Smurfs, and other species of characters who reproduce.

Human reproduction is a physical act, which is more desirable after puberty in both males and females.

Regardless of their physical readiness, most humans are not mentally ready to reproduce until they are near adulthood. Chastity is considered a "heavenly virtue," which prompts most heterosexual lovers to wait until marrying before engaging in close intimacy. This simultaneously ensures that both partners are ready to become parents should the end result of their intimacy be a child.

If interested in becoming a parent (either singularly or as a couple), Smurfs must pay a visit to Mother Nature and receive her blessing to have a male Smurf baby delivered to them. A baby Smurfette, however, must be created magically with the same spell used to created Smurfette, Sassette, and Moxette.

The first known case of physical reproduction among the Smurfs in the HERO: The Guardian Smurf story series was when Wonder Smurfette was pregnant with Hero's daughter Saviour. However, the cause of the pregnancy was Mother Nature conferring a blessing of a child upon Wonder, which lasted for a total of nine months, the length of a standard human pregnancy.

Many years after Hero and Wonder's wedding, Hero's fellow Smurfs used the Mirror Of Opposition to have female counterparts for themselves and soon became parent Smurfs. Around his 500s, Hero became the father of another child through his second wife Smurfette, whose pregnancy in her elder years came as a miracle.

The birthing process in considered painful for most female Smurfs, though in the case of Wonder and eventually Smurfette, they both only experienced severe pain at the beginning of the process in the deliveries of their children, but the pain was quickly suppressed by Hero, who was constantly using his Healing technique in order make sure they both had enough strength to see the delivery through.

The first Smurf to be produced by Glovey and Smurfette was their son Angelo. The storks come around and leave more baby Smurfs in the village, but as time passes, new Smurf villages and clans start to appear along with more Smurfettes. Eventually, the Smurfs break away from their old custom ways and start mating with Smurfettes to produce new Smurfs that contain genetics of both mother and father. Smurfs, however, will never mate with their own kin, for the see it as something wrong and taboo similar as to how the humans do as well.

In the Smurfs: The Magical Blue story series, the first case known of real reproduction is when Smurfette and Smurfo were married and when she was pregnant for her two more children, Iron and Eris. For the Smurfettes, however were unable to reproduce, due to the fact that they already have children. Years later when the children grew up, they all got married and reproduce their own children. This is very painful for all of the next generation of Smurfettes, but quickly healed by the power of the Neon Power's healing.

Retrieved from "https://smurfsfanon.fandom.com/wiki/Reproduction?oldid=175624"
Community content is available under CC-BY-SA unless otherwise noted.