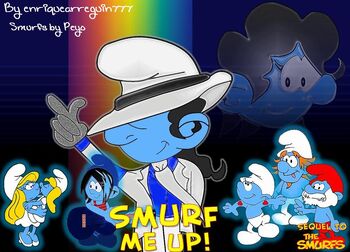 "Smurf Me Up!" (Also referred to as the "Glovey Story") is the story created by The Gloved One, that takes place right after the Smurfs make it back home to their village, after being lost in time.

A spotlight is lit on Glovey Smurf. He appears walking from the darkness wearing the clothes he wore when he first arrived to the village. He snaps his fingers, turning the light on and off. After the light turns back on, he is seen wearing his iconic hat and jacket. The Smurfs theme begins playing as he moonwalks and performs a spin. As he spins, he spins the whole screen with him and a new one appears with All the Smurfs doing the circle dance in the village. A first person view is seen watching Smurfette winking. Papa Smurf and Grandpa are seen waving. The Smurflings appear running in circles around the screen. The background turns into a night scene as it zooms out, revealing Glovey Smurf, who looks up at a shooting star while the music fades slowly. A dark screen appears for a brief moment as the music dims. The Music resumes again as Glovey appears in his enchanted Smurf form glowing and he begins to fire stars from his fingers upwards and causes a spectrum to form. The frame freezes and the heading "Smurf Me Up" appears next to him as the music ends with him in the center alone.

Second Intro Sequence - Used from the Defying The Gods episode through the Farewell Glovey Smurf episode.

A spotlight is lit with the sound of an audience cheering. Glovey Smurf quickly runs from the right direction wearing his regular Smurf pants and white tank top. He waves his gloved hand, creating star dust, which he throws at the screen, making a bright flash which starts the Smurfs' theme. He is then seen running with the Smurflings through the Smurfs' forest until they reach the Smurfs' village. They run in to many Smurfs running away as they notice the druid Nemesis attack with his dark magic. Glovey runs away with the Smurflings to the opposite side, only to be assaulted by Lord Balthazar. The Smurflings run away into separate directions until Carock appears in front of Glovey Smurf. Soon, all the Smurfs are floating in the air by some magic force. Darkness covers the village as Glovey looks up and sees a shooting star. He raises his hands up to the heavens as he glows in a blue aura. His clothes change to his Enchanted Smurf form and he creates a giant rainbow beam that destroys the evil magic, making all the baddies poof away as the Smurfs all begin falling down to the ground while Smurfette lands on his arms. She smiles and gives him a kiss on the cheek. He makes a shocked face as he sees the three wizards still approach the Smurfs still. All the Smurfs begin running away into the forest as they go down the familiar slide and hide behind a tree, where their eyes are only seen blinking. Glovey then turns around and gets tackled by the Smurflings. The title cover then appears with Glovey in the center with the Smurflings next to him.

Third Intro Sequence - Used on all later on episodes.

The Smurfs are all seen doing their Smurf dances with Glovey being the only one who dances with his usual routines. He is then joined by all six Smurflings as they dog pile on him. They are all seen marching down peacefully across the village. The music gets darker as a giant pole with a flag lands near them with the symbol of the Illuminati. Soon, every Smurf begins to panic as many druids appear out of nowhere with big nets as they capture many Smurfs. Irad appears from a fiery explosion as he uses his magic to fire in many directions balls of fire. Snappy, Slouchy, Nat, Sassette, and Blue run away except for Glovey and his son Angelo. They both look up and begin to glow in a blue aura. Glovey transforms into his Enchanted Smurf form while Angelo's hands only remain glowing blue as his power is not as strong. Both hold ends and fire multiple flying stars at all the druids. A bright flash is seen in the sky and Zowfee is seen coming down to join Glovey and Angelo. Glovey and Angelo both fire their rainbow beam while Zowfee fires his Specium beam. The three beams are aimed at Irad, making him burst into flames. Soon, the transformations wear off while Zowfee's chest begins to blink and he flies away. The Smurfs all cheer for the father son duo. Smurfette runs into Glovey's arms and gives him a big kiss, making him make his eyes wide and cheeks red while Angelo sticks his tongue out in a grossed out manner. Everything dims slowly as the title card appears with Glovey in the middle in his Smurf Criminal outfit with a rainbow beam behind him. He is seen joined with Papa Smurf, Gargamel, Smurfette, and Angelo to his sides.

The animation style for this series is that of The Smurfs/Smurfs' Adventures series and The Smurfs and the Magic Flute film.

The soundtrack used throughout the series is also the same that of The Smurfs/Smurfs' Adventures series and The Smurfs and the Magic Flute film. It also features officially licensed songs used as background music or covered by characters.

Floating child saves Empath and the two flee the debris

The Glovey Smurf Saga -- The Glovey Smurf Saga is the first saga in the Smurf Me Up series. It focuses on introducing the protagonist and newest Smurf in the region of the cursed country. It begins with the pilot story, The Gloved Smurf, which is believed to be sometime after a successful attempt of the Smurfs returning to back to their village as seen in the events of Season 9 from the SMURFS series after Cupid fires an arrow, predicting a new joy in their journey. Meanwhile in normal times, the evil Nemesis attacks a village, forcing the English monarch to desperately send a young servant as the last resort. The boy stands no match for Nemesis and is turned into a Smurf and then sent off to a forest in the cursed country. There, he meets Gargamel and the Smurfs. He starts off in a coma and takes the name Glovey Smurf, whom he received by Gargamel as a mockery because he only wore one diamond studded sequin glove. Glovey uses his Smurf instincts to help the Smurfs since he believed to be one of them. He follows Gargamel who had taken the Smurfette prisoner, hoping for the Smurfs to follow in the trap. Unfortunately for Gargamel, Glovey Smurf alone shows up and saves the Smurfette. The young boy stood no chance for the Smurfette's beauty and openly admits his love to her, claiming her to be the girl of his dreams. He helps her escape and stays in her place. Smurfette found herself attracted to the haired Smurf and refused to leave him trapped. Gargamel spots them, but both manage to escape in the end back to the village, losing the evil wizard, and starting new adventures with the Smurfs which includes the return of the treasure hunter imp and his gargoyles, new wizards, the Krampus demon, and even the marriage of Glovey Smurf and Smurfette along with the birth of their son.

The Defying the Gods Saga -- The Defying the Gods saga is the second saga in the Smurf Me Up series. It revolves the Smurfs traveling around many landmarks as they get threatened by supernatural forces calling themselves gods. Glovey inspires the Smurfs to not bow down to the idols, rather to challenge them so that nobody ever steps on the Smurfs again. It begins with the Smurfs going into outer space to defeat space pirates as they discover Glovey and Wild Smurfs' origins as alien royalty from the Sun. Glovey and Wild learn that they are blood brothers and meet their parents along with new allies. Smurfette too learns about her past life as a supernatural Smurfette being before she was transformed into blue clay and becoming a regular Smurfette. The saga ends after Glovey's crusade of defeating all the gods along with witches and wizards is complete. Soon after, Glovey convinces his fellow Smurfs to follow his God who has kept him alive throughout everything. Ironically soon after, Glovey falls and is believed dead.

Season 3 (Title Pending) -- The third saga revolves around Angel Smurf who is being raised his mother, Smurfette, as he questions where his father is. Meanwhile Glovey who is believed dead is discovered to be alive, but missing. More to be added later...

Retrieved from "https://smurfsfanon.fandom.com/wiki/Smurf_Me_Up_(Series)?oldid=156826"
Community content is available under CC-BY-SA unless otherwise noted.