"Smurfed Behind: Smurfs Of The Stone Age" is a story that is part of the EMPATH: The Luckiest Smurf story series. It is a combined adaptation of "The Smurfs That Time Forgot", "Lost In The Ages", and "Cave Smurfs" set in that particular universe which takes place at the same time as "Smurfed Behind: The Departure", the canonical beginning of The Lost Year.

Papa Smurf, Grandpa Smurf, and Crinkles the dinosaur arrive in the Smurf Forest of the prehistoric past with the Key Of Chronos intact -- but they see that the vortex hasn't closed yet, as all of the other Smurfs come pouring out through it, including Puppy and Smoogle. The Smurfs all notice that their clothes have changed, and so Papa Smurf informs them that when traveling with the Key of Chronos, their clothes will change to whatever is appropriate for the time period and location.

Snappy sees Crinkles and is happy to see him alive again. But soon the timelost Smurfs find themselves in danger as some very big dinosaurs have spotted them. They all make a run for it, but in the process the Smurfs split up, and Papa Smurf and Grandpa Smurf discover that they have led a group of Smurfs into a tar pit. As they cry out for help, Crinkles responds by butting a large rock into the pit, emptying out all the tar. Safe for the moment, the Smurfs now wonder what they're going to do with all the other Smurfs now lost in this time period. Papa Smurf suggests that most of them should stay in one place while he and Grandpa Smurf help Crinkles find his family. Snappy offers to come along, and so the three Smurfs set off with Crinkles on their own journey.

Meanwhile, a cave child named Grog is being punished by his teacher for playing a prank on his fellow student Unga and for keeping a pet, a sabertooth cat named Mangy, hidden in the classroom. Sitting in a corner wearing a dunce cap, Grog watches as his teacher leads the class out on a field trip while being told to stay where he was. Grog decides to go on his own field trip with his cat Mangy.

While searching for Crinkles' parents, the three Smurfs and the dinosaur find themselves being chased into a dead end by a large rampaging dinosaur. Papa Smurf's magic powder can only manage to help Grandpa Smurf and Snappy reach higher ground on the ledge above them. Now above the dinosaur, Snappy jumps on top of the big dinosaur, closing one of his eyelids, while Grandpa Smurf does the same closing the other, thus causing the big lizard to go out of control until Crinkles bumps him into knocking himself out with a rock. Snappy and Grandpa Smurf safely drop out of the way before the dinosaur drops cold, allowing the three Smurfs and Crinkles to escape.

Grog discovers a "blue lizard", which turns out to be Clumsy, gathering rocks while he was out with his cat on their own field trip. Grog sees that Clumsy is able to create "dancing lights" by striking together the two rocks and so captures him and takes him back to the classroom cave to show his teacher and his fellow students.

Stranded in the past 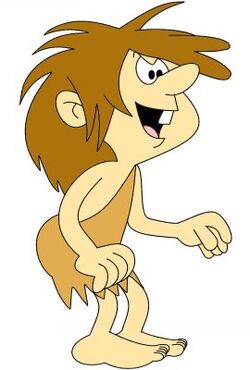 Back in the classroom cave, the teacher and the students wonder how Grog is able to start a fire. Grog promises to show them how he is able to create the "dancing lights", but only if they treat him with proper respect. While they are not looking, Grog pulls out his "secret", which is Clumsy tethered to a vine around Grog's neck, telling his captive to make the sticks glow or else.

Brainy, Handy, and Smurfette decide to go out and find Clumsy when they see he has taken too long in returning. Hefty and Duncan McSmurf warn them to be careful and that they will stay behind to watch the camp. In their search for Clumsy, they discover a wisp of smoke up ahead. Smurfette finds foot tracks nearby, indicating that Clumsy was here where the smoke was, but he didn't leave there alone.

Meanwhile, Papa Smurf, Grandpa Smurf, and Snappy have reached the point of frustration in their search for Crinkles' parents when a nearby rumbling of the ground reveals that they have found what they were looking for -- and the three Smurfs watch joyfully as Crinkles is reunited with his parents. Grandpa Smurf says that now that the search is over, they can return to camp, and so Crinkles offers to bring the three Smurfs back to camp with his parents escorting him.

Brainy, Handy, and Smurfette find the cave that Clumsy was taken into when they run into Grog's sabertooth cat, who brings the three "blue lizards" to his master. Clumsy offers to show Grog how to cook if he would let his friends go, but after the demonstration, the cave child decides to cook Clumsy's friends on a stick and then feed them to his cat. Sparks fly from the fire and burn away Clumsy's vine leash, allowing him to run for it. Grog and Mangy chase after Clumsy as he flees from the cave, but then they see a few more "blue lizards" are coming with some dinosaur friends. The cave child and his cat run back into the cave to flee from the dinosaurs, but Crinkles catches up with him and butts him into the fire, which he puts out with his rear end. Papa Smurf, Grandpa Smurf, and Snappy rescue Clumsy and the other three captured Smurfs as they exit the cave with Crinkles and his parents.

Back at camp, Papa Smurf is glad to see that all the Smurfs are together and well, and Snappy tearfully watches as Crinkles heads off with his parents. Grandpa Smurf gets the Key of Chronos from Duncan, which he has kept safe, and attempts to open the vortex that will take them back to the present time when the big dinosaur that has attacked Papa Smurf, Grandpa Smurf, and Snappy earlier comes back to attack the whole group of Smurfs. While they fend off the dinosaur as long as possible until Crinkles returns to deal with him again, Grandpa Smurf loses his grip on the Key of Chronos as it falls into a small crater full of molten lava. As the key begins to melt, the chronosyte crystals in the key pop out.

The Smurfs are glad to see the large dinosaur gone for good, but are greatly disappointed to find out that their way back home to their own time period was now melted in a pool of lava.

With Puppy outside the cave guarding the Smurfs huddled inside it, the Smurfs sing happy birthday to Empath, wishing that they could all be home to celebrate his birthday, and Smurfette is in tears, wondering if she will ever see Empath again. Tapper tries to encourage Smurfette to have faith. Papa Smurf is glad to discover that the chronosyte crystals have been salvaged from the key, but he now faces the difficult challenge of having to arrange them in a formation that will open the vortex to at least get them out of the prehistoric past -- though as Father Time has reminded him, there's no telling where or when the arrangement of the crystals will take them. As Papa Smurf begins to make an arrangement for the crystals, Brainy offers to help, only to cause the crystal arrangement to collapse when he places a single crystal on it. This makes Papa Smurf so upset that he kicks Brainy out of the cave. Greedy also leaves the cave to go look for food, and so Brainy decides to join him.

While the two Smurfs are outside, Greedy takes to knocking down giant figs from a tree as Brainy busies himself with writing things in his journal. Then Brainy hears something approaching him from behind, and sees that it's a giant baby bird looking for his mother. Brainy cowers in fear, but the baby gives him a big hug, thinking that he is his mother. As Brainy tries to get rid of his newfound follower, Greedy is having a hard time trying to hit the last fig on the tree and so decides to stand upon an egg shell to get a better aim, but he ends up falling inside the egg shell and can't get out. Then a mother bird comes along and picks up the egg shell, taking it back to her nest, thinking that her baby is still inside it. However, when the egg hatches, it turns out to be Greedy all covered up in leftover feathers. Fearful of his captor, Greedy hides himself back inside the egg shell.

As Vanity, Handy, and Wild search for both Brainy and Greedy, wondering where they could have gone, Greedy again emerges from the shell, begging the mother bird not to eat him when he looks down and sees how far up the nest is. Greedy's cry for help is immediately picked up by the three searching Smurfs, who then see him in the nest, all covered in feathers, as the mother tries to feed her "newborn child" with worms.

Back on the ground, Wild tells Vanity and Handy that he's going to climb up the cliff to the nest to rescue Greedy, which he does until he faces an angry mother bird protecting her "child", causing him to roll down the cliff and into a fallen fig. As the three of them now go off to tell Papa Smurf that Greedy is in trouble, Brainy continues to read to the mother bird's baby until the baby pulls the book out of Brainy's hand and signals to his "mother" that he's hungry. Brainy leads the baby bird to a tree full of berries that the baby starts to eat at first, and then soon starts spitting them at Brainy, not liking them. Frustrated, Brainy decides to try finding Greedy so he can figure out what to feed the baby bird.

Handy and Vanity return to the base of the cliff with Papa Smurf and Hefty, who is now dressed up like a bird. They now see that the mother bird is about to give Greedy his first flying lesson by nudging him out of the nest, which causes him to fall until he grabs onto a branch for dear life. Papa Smurf now has Handy launch Hefty into the air to distract the mother bird by flying around her with his glider wings. At first she doesn't buy it, but as Hefty tries to imitate the mother's bird calls, he has a new problem to deal with -- another bird who's fallen in love with him and is now chasing him.

Finally, the mother bird makes Greedy fall from the nest, which makes Papa Smurf tell Hefty to dive. He does, which gets the love bird off his tail and also breaks Greedy's fall at the same time. But they're not out of trouble yet -- the mother bird is now chasing after them. Hefty and Greedy land safely into a bush where they hide until Brainy comes along with the mother bird's actual baby. The Smurfs watch as mother and baby are happily united with each other and fly back home.

Soon Papa Smurf is finished arranging the crystals into a formation, which causes the vortex to open, and all the Smurfs as well as Puppy and Smoogle jump inside it, wondering whether it will take them straight home. All Papa Smurf could say to that is "only time will tell".

Retrieved from "https://smurfsfanon.fandom.com/wiki/Smurfed_Behind:_Smurfs_Of_The_Stone_Age?oldid=119905"
Community content is available under CC-BY-SA unless otherwise noted.