Smurfnip (also referred to as smurfmint, smurfwort, or pitufojuano; sometimes colloquially referred to as nip, weed, grass, pot, or smurfweed) is a plant that grows wild in the Smurf Forest in the EMPATH: The Luckiest Smurf story series and the HERO: The Guardian Smurf story series. It is a green flower that sprouts with dark green leaves that resemble those from a cannabis plant.

NOTE: The following information applies mainly to the EMPATH: The Luckiest Smurf series. It is unknown whether the HERO: The Guardian Smurf series version will be identical.

According to Papa Smurf's books about plants, smurfnip usually has a calming effect on Smurfs, but has a chemical compound similar to tetrahydrocannabinol (THC, which is normally found in marijuana) that may cause mind-altering hallucinatory effects when it is eaten or when its fumes are inhaled during burning, such as in the EMPATH: The Luckiest Smurf story "A Haunted Christmas" where Nabby hallucinated seeing food everywhere after he ate smurfnip during a famine around Christmas. First-time users may feel a bit of numbness setting in, or possibly have disturbing dreams. According to the story "Smurfnip Madness" from the same series, concentrated amounts may also have similar effects on humans and domesticated animals such as cats and dogs. Smurfnip intoxication is usually indicated by the whites of a person's eyes (usually a Smurf's) turning a shade of mint green. An overdose can possibly lead to anxiety, paranoia, nausea, and panic attacks, but rarely has any Smurf actually died from such an overdose, as the chemicals found in smurfnip are non-toxic.

As far as health benefits, smurfnip in the EMPATH story series has been shown to work as an analgesic when it comes to dealing with eye conditions such as glaucoma, though this requires extracting oil from the plant which in this state does not cause any hallucinogenic effects. It can also improve the appetite of Smurfs suffering from medical conditions that may deprive them of being able to eat. 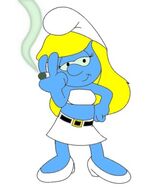 One time Greedy accidentally used smurfnip-laced smurfberries in the baking of his smurfberry cookies, which caused his fellow Smurfs and even Papa Smurf to experience weird hallucinations that almost put the village in danger. Only Tracker, Sickly, and Baby Smurf didn't eat the berries and thus were unaffected, with Sickly being allergic to smurfnip. After the effects had worn off, Papa Smurf warned his little Smurfs to avoid smurfnip at all costs. Some Smurfs, however, still smoke smurfnip from time to time, usually behind Papa Smurf's back, though it is usually mixed with other smoking herbs to reduce the side effects and mask the obvious odor. Eventually Dabbler did research on the plant and discovered how to create a strain of smurfnip that would have the same potency as regular smurfnip but without the hallucinogenic side effects, which led to the removal of the ban of smoking or eating smurfnip for all Smurfs, not to mention the creation of The Wake N Bake Brew Shop, which is dedicated to serving smurfnip and smurfnip-infused products.

Smurfnip oil extract has been used for the creation of eye drops that Orbit uses on a daily basis to control his worsening eye condition. It can also be used for creating lip balm for Smurfs suffering from chapped lips. During the Smurfs' time-travel adventures in The Lost Year, Papa Smurf had to substitute marijuana for smurfnip in the making of Orbit's eye drops.

Smurfnip is dangerous to use during a pregnancy, as it could possibly cause miscarriage, though in "The Birth Of Psycheliana", Smurfette had inhaled smurfnip smoke without any dire effects on her unborn child Psycheliana, most likely due to the child having telepathic and telekinetic abilities while still in the womb.

Smurfnip is heavily used by the Mirror Universe Smurfs as a recreational drug along with pixie dust.

In the mini-story "A Jar Full Of Memories", Empath was found smoking a smurfnip blend cigarette while he was privately mourning the loss of Smurfette.

The character Pitufo Juano serves as a personification of the substance, usually tempting Smurfs who are abstaining from smurfnip into smoking it.

Lazy has crafted a Christmas song parody called "Green Leaves", which is about the joys of smoking smurfnip.

Smurfnip also makes an appearance in the HERO: The Guardian Smurf story series, as Smurfette and Wonder are seen in one instance smoking it. In the story "The Crazy Plant", Doctor discovered and projected that longtime exposure to smurfnip would have caused problems in pregnancy with the Smurfettes. Eventually smurfnip became such a problem with the Smurfs that Papa Smurf had Mother Nature remove all vestiges of the plant entirely from the forest. Although before that, Papa Smurf had allowed Doctor to keep a few Smurfnip plants in order to do medical research.

Unbeknownst to the Smurfs during the events of the story "The Crazy Plant", Jokey had managed to smuggle a few smurfnip plants into the basement of his home, in order to grow his own stash of smurfnip.

A song called "Smoke Smurfnip Everyday" has been crafted as an ode to the joys of smurfnip.

Retrieved from "https://smurfsfanon.fandom.com/wiki/Smurfnip?oldid=178525"
Community content is available under CC-BY-SA unless otherwise noted.