"The Adult Smurflings" is a story that is part of the EMPATH: The Luckiest Smurf story series. 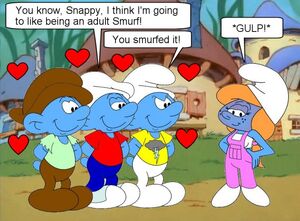 Papa Smurf and the other Smurfs were soon made aware that Blossom had used her power to make the Smurflings into adult Smurfs and so decided to help the now "adult Smurflings" get used to their new adult life. First of all, upon Tapper's own personal suggestion and insight, the "adult Smurflings" could no longer live in the same playhouse with each other and so had to move in with other adult Smurfs for the time being, with Sassette staying with Smurfette. Secondly, the "adult Smurflings" now needed to contribute to their society by working, so with the help of Hefty Smurf, the four of them were assigned various duties that he thought was appropriate for them.

At first the "adult Smurflings" didn't mind being like the grown-ups and even enjoyed it for a time, experiencing things they were never allowed to do when they were just Smurflings. However, over time, they begin to realize that they missed the fun of living and doing things together just because they were Smurflings, but they realize that they cannot go back to being Smurflings because Blossom's power to mature living things cannot be undone. Their decision to become Smurflings again was cemented when Papa Smurf planned to have the Smurflings' playhouse demolished as they would no longer have any use for it. Then the "adult Smurflings" overheard Papa Smurf and Grandpa Smurf talk about Father Time's Reverse Clock being the only thing in his workshop that can de-age things, and believe that they can use it to go back to their proper Smurfling ages.

One night the "adult Smurflings" sneak off to Father Time's workshop to use the Reverse Clock, but as they enter the workshop they see that Nat's pet butterfly had entered the clock when its door is still ajar. Nat rushed into the clock to save him, as did Snappy, Slouchy, and Sassette, but then the door to the clock sealed them in and they couldn't get out until the clock struck twelve. When the door finally opened again, the Smurflings found themselves back at the age they were originally before they were aged into adults, and Nat's pet butterfly had turned into a caterpillar. Father Time soon found out what the Smurflings were doing in his workshop and brought them back to the village to inform Papa Smurf.

Though the Smurflings were punished for going into Father Time's workshop without permission, Empath, Smurfette, and Tapper were glad to see that the Smurflings are now happy to be young Smurflings again, realizing the wisdom in letting themselves grow and mature naturally rather than all at once.

"As seed turn into blossoms, as blossoms turn into fruit, may your lives now experience the later years of your youth."

- Blossom as she turns the Smurflings into adult Smurfs

"Okay, boys, what are you smurfing at?" (Notices her chest and covers it.) "Oops, ha ha ha...I guess I'm going to need a smurf of clothing now."

Retrieved from "https://smurfsfanon.fandom.com/wiki/The_Adult_Smurflings?oldid=116022"
Community content is available under CC-BY-SA unless otherwise noted.