Soon a house was built for Smurfette. Handy was busy painting the outside, while she was inside looking at herself in her compact mirror. She looked around to see if the coast was clear before speaking to the mirror.

"Calling all Wizards! Gargamel! Can you hear me?" she whispered. Soon Gargamel appeared in the mirror's glass.

"It's about time! Where are you?" Gargamel asked.

"I'm in the Smurf Village and...," Smurfette said, before Gargamel butted in.

"Excellent! Now get out there and capture their little blue hearts, and don't fail. Remember I made you, and I can break you!" Gargamel said sternly before he disappeared from the glass.

"Oh my! I guess I better get started," Smurfette said to herself before there was a knock on her door. She answered it to Hero.

"Hi, Smurfette! Papa Smurf wanted me to tell you that we are smurfing a party for you tonight!" Hero said.

"A party... for me?" Smurfette said excitedly.

"Yes, to celebrate you staying with us. I can't tell you anymore as this smurf has a busy day, but tonight we are going to smurf some fun!" Hero said, before running off.

"You're in for a surprise alright!" Smurfette said with a sinister smirk.

She then saw Clumsy and Brainy hammering down a pillar. "Yoohoo!" she called to them, causing Clumsy to hammer Brainy into the ground.

"Not so sorry are you are going to be! And you can blame it on her!" Brainy said.

"Maybe I need to try a more subtle approach! Maybe a picnic! I'll announce it at that party tonight!" Smurfette said.

Later, it was getting late and all the Smurfs were prepared for Smurfette's party.

"Are we all ready, my little Smurfs?" Papa Smurf asked.

"Yes, Papa Smurf!" they all said in unison.

"Wait! I'll quickly go and freshen up! I'll only take a second and no more!" Smurfette said as she ran to her house and started getting ready: starting with her lipstick, then brushing her hair, then adding make-up, then fixing her eyelashes, puffing her face with a powderpuff and finally putting on spray.

"Okay! Well, let's go!" Harmony said, as the Smurf got together and started singing.

"No way! That's not how you dance! Come on, I'll show you!" Smurfette said, as she took Hero from the group and took both his hands.

"Just follow me! Like this! One-two-three, one-two-three..." Smurfette said, as she started dancing with Hero, with the other Smurfs not liking her style of dancing.

"Are we having fun yet?" Jokey asked.

"I hate having fun!" Grouchy said.

Soon they had finished dancing, Smurfette decided she wanted to sing.

"Now, if you'll allow me, I'm going to perform a little song for you," Smurfette said, before she started to sing, but she was singing out-of tune.

"In the secret of my he-aart"
"The-uh sweetness of the mo-oon"
"That dreams of fortune's pa-arrrt"
"On dark nights it sings the tu-nne, yes, I will remember always"
"On this night that is ending"
"Of being in a dreamy daze"
"A pretty dream of loving." she sang, before performing a curtsey.

"BRAVO! ENCORE! SING ANOTHER ONE!" Jokey called, before Dempsey grabbed him, ran behind a Smurf house, and tied him up.

They really have no sense of humor! Jokey thought to himself.

Yes! Takeo thought to himself, as the Smurfs made their way home. Smurfette continued to talk "...because tomorrow, we have to be up at dawn! We'll be heading for a nice picnic in the forest!"

"What's wrong with you Smurfs?" he asked.

"It's the Smurfette! She's just so annoying!" Brainy complained.

Hefty sniggered. "Smurfing from you, Brainy?"

"This smurf finds nothing wrong with her. You're all just smurfing this!" Hero said.

"How can you smurf nothing wrong with her?" Handy asked. "She's not allowing us to smurf time to ourselves, or the time needed to get work done."

"Yeah! We all hate the Smurfette!" the others said in unison voicing their own disgust.

"Shame on you Smurfs! Aren't we supposed to smurf everything for each other? My master in Other World taught me and my fellow students to respect all creatures, regardless of who and what they are. You Smurfs are not treating Smurfette with that level of respect! You Smurfs make me sick!" Hero said with some disgust in his voice, before heading off for home.

Brainy shook his head, "I just don't get him, if only he smurfed it from our point of view."

"If I knew Smurfette would be this annoying, I wouldn't have smurfed her to the village," Hefty said. "I'm now beginning to regret it."

On their way to Nikolai's Bar, Fergus and Abloec were having a 1-to-1 chat.

"Let me tell you, laddie," Fergus said. "I've never met someone so annoying like Smurfette."

"I'll admit that she can be annoying at times, my fellow Fergus," Abloec answered. "But I can feel it in my spirit that she's smurfing down the path of darkness, I can only continue to pray to Almighty and hope that she smurfs His everlasting light and smurfs towards the path of goodness." 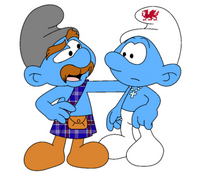 "You seem to rely on this Almighty all the time, laddie," Fergus insisted.

Fergus smiled, "Well, I too will pray towards this Almighty and I hope that He truly will make Smurfette smurf off the path of darkness and down the path of goodness."

Abloec smiled back, "I'm sure the Almighty will answer our prayers, my fellow Fergus."

The next morning, Smurfette was excited for the picnic.

"Hello! Are you all ready?" she asked.

"And I have to smurf some sarsaparilla!" Dempsey added.

"And I have to smurf up some smurf!" Nikolai added.

"And I have to rehearse my music!" Harmony added, before all the Smurfs started walking away.

"So nobody wants to come with me to my picnic?" Smurfette said sounding very upset, before she started crying.

"I'll smurf along with you on your picnic, Smurfette!" Hero said.

"You will, Hero?" Smurfette asked, wiping away her tears.

"Of course... since no other Smurfs are willing to!" Hero said, looking back at the other Smurfs with a frown.

"He's right! We'll need a few more Smurfs to smurf along with her!" Papa Smurf whispered to some Smurfs behind him.

"But who then?" Hawkeye asked.

"Well then, you, you, and you will be volunteers! Now get smurfing!" Papa Smurf said, pointing to Hawkeye, Dempsey, and Fergus.

Soon they were out in the forest trying to find a good spot for the picnic.

"...and we'll make camp up there on top of this mountain!" Smurfette said, as the others followed closely behind.

Soon they found a good spot and they started setting up the picnic.

"There! While you get everything ready here, I'll go take a look at the surroundings!" Smurfette said, as she walked off. As the Smurfs were busy setting up the picnic. Smurfette came running back, "Wait! I found a much prettier place, down there, near the marsh!"

The Smurfs packed up the equipment and followed her.

"Let's go! Try to keep up!" Smurfette called, and eventually the picnic was set up by the marsh, Smurfette decided she wanted to play a game with the Smurfs that traveled with her.

"Good! And now we're going to play a game that's crazy fun: blind man's bluff! I'll go first!" Smurfette said, as she wrapped the blindfold round her eyes and started trying to catch the other Smurfs, who decided to wander off, except for Hero who decided to play the game.

"Yoohoo! Careful! I'm going to get you!" Smurfette called. Hero was happily avoiding her.

"Hee! Hee! I hear you! Come closer if you dare! Hee! Hee! Hee! We're having so much fun!" Smurfette giggled.

The other Smurfs were busy talking to each other about Smurfette.

"Why Hero is even smurfing with her is beyond me!" Dempsey said.

"I know! I think there is something not right with the laddie," Fergus replied.

Meanwhile, Smurfette was walking down the wooden board that was placed over the water.

"Cuckoo! Heeheehee! I know full well you're hiding over here!" she said happily.

"LOOK OUT! SMURFETTE!" Hero shouted, before Smurfette fell into the water.

"I'll get you, Smurfette!" Hero said, before jumping in and pulling her out safely.

"Are you okay, Smurfette?" Hero asked.

Just then the others came running over.

"She fell into the water, but this smurf got her. She's okay," Hero answered.

"You're not looking so good, lassie. It'd be better if you smurfed back to the village," Fergus said.

"But I feel so weak! I could never walk all the way there!" Smurfette responded sadly.

Soon Hero picked up Smurfette and flew her back to the village, as the others packed up the picnic equipment and followed.

Back in the village, Hero was with Smurfette in her house. She was wrapped up in a blanket and sitting in front of the fireplace.

"Get yoursmurf warmed up! Hopefully you will feel smurfy soon." Hero said.

Hero smiled and left her house, Smurfette could feel something strange happening inside her, as if her heart was trying to tell her something.

"What are these strange feelings I'm smurfing?" she asked herself. "But I can't let those get in my way. Maybe if I can't lure them out, maybe I can flood them out!"

Retrieved from "https://smurfsfanon.fandom.com/wiki/The_First_Female_Smurf_(Hero_Stories)/Part_3?oldid=175135"
Community content is available under CC-BY-SA unless otherwise noted.