"The Grouchiest Friendship" is a Smurfs fanfiction story that is part of the EMPATH: The Luckiest Smurf story series.

This was originally intended to be the first part of a two-part EMPATH: The Luckiest Smurf story titled "The Best Of Friends", as it starts off with no introduction. The other part of the story would have been about Polaris Psyche. 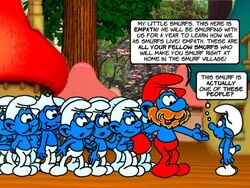 The story takes place during Empath's first visit to the Smurf Village. While he learns all there is in the Smurf Village about being a Smurf, including the expression of emotions, he discovers that one of the Smurfs - Grouchy - prefers to be all by himself and would rather not participate with his fellow Smurfs in any activity. As Empath tries to be friends with Grouchy, he finds that he isn't the kind of Smurf that every other Smurf makes him out to be, and also that Hefty has been constantly bullying him into doing things he would rather not do.

In that one time that Empath decided to stick up for Grouchy when he was being bullied, Hefty told Empath not to mess with him as he walked away; Grouchy gave a simple, "Thanks" before also walking away. After that, Grouchy confided in Empath about why he prefers to be by himself and why he acts the way he does - that was when the two of them decided to become friends. However, it didn't stop Hefty from now teasing the both of them, which hardly affected Empath but eventually made Grouchy mad enough to want to hurt Hefty.

Then Hefty confronted Empath all by himself and told him to stop standing up for Grouchy. When Empath refused to do so and told Hefty to stop bothering Grouchy or he will let Papa Smurf know how he is abusing his position as the assistant leader, Hefty decided to teach Empath a "lesson" and started pounding on him. Grouchy intervened on Empath's behalf and told Hefty to back away or he will let Papa Smurf know what he did to Empath, which caused Hefty to back away. After Empath was taken to Papa Smurf to be told of what Hefty did to him and to have his injuries treated, Empath and Grouchy realized they have found friends in each other.

Retrieved from "https://smurfsfanon.fandom.com/wiki/The_Grouchiest_Friendship?oldid=170712"
Community content is available under CC-BY-SA unless otherwise noted.