"The Only Begotten Son" is a mini-story in the EMPATH: The Luckiest Smurf series. 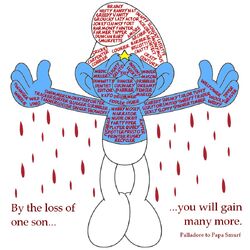 It was several days later during the reconstruction of the Smurf Village that Tapper's Tavern had reopened, and the Smurfs were able to take a break and enjoy themselves from all the hard work they had to do. Tapper noticed Empath sitting at the counter, just staring at the crossword puzzle he was working on and letting his glass of sarsaparilla ale sit there with hardly a sip.

"Great Smurfiny Crickets, my good Empath, what seems to be smurfing on your mind that you would be like this?" Tapper asked.

Empath sighed. "This smurf is still thinking about the night Papa Smurf revealed to this smurf the fact that this smurf was his only begotten son, and that the rest of you were his adopted sons."

"I would smurf that it wasn't easy for you to learn that fact about yourself, or that Papa Smurf would wait years for you to smurf home to reveal it to you," Tapper said.

"This smurf can only wonder why most if not all of Papa Smurf's 'adopted sons' forgot that they had parents before him, Tapper...including you," Empath said.

"We were all children who were too young to smurf an entire village on our own, Empath," Tapper said. "Papa Smurf was the only adult Smurf around at the time that we can smurf our trust in for anything, and even he wasn't so sure of himself to be the village leader that he became over the smurf of time, let alone be the Papa Smurf to a hundred Smurfs who all lost their Papa and Mama Smurfs. But when we learned to smurf together as a family, we became so attached to Papa Smurf that it was as if he had been our Papa Smurf all our lives." 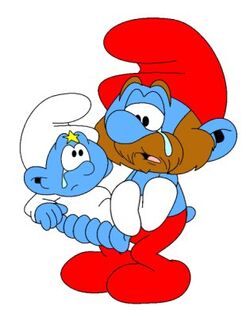 "And now this smurf has ruined what you believe, by having Papa Smurf reveal to this smurf that I am his only real child," Empath said.

"What happened to you or any of us was never your fault, Empath," Tapper said. "You should of all Smurfs be grateful that your Papa Smurf is still alive and that you can claim him as your own Papa Smurf. If he wasn't, this whole village would have perished, and possibly us along with him."

"This smurf never thought that my existence would be the catalyst for all of you becoming Papa Smurf's sons and daughters, Tapper," Empath said.

"Then I would say you have something in common with the Almighty, for He also has an only begotten Son through which many would be adopted as His sons and daughters," Tapper said.

"This smurf resents the idea of ever being compared to a deity, Tapper," Empath said. "All this smurf wants is to be like all this smurf's fellow Smurfs, not to stand above them as their spiritual redeemer or something like that."

"That wasn't my intention, Empath, and I understand your reasons for not being worshiped like a god," Tapper said. "The Almighty's Son was of a smurf that He related to being like His brethren, knowing what it's like to feel everything they do when it smurfs to living as a man, except that He never sinned. Even when people worshiped Him, He never smurfed the praise all for Himself, but instead smurfed it all to His Father."

"Yet this smurf doesn't understand how this Almighty has adopted humans to become His children through this only begotten Son, Tapper," Empath said.

"Papa Smurf believed you have died when he smurfed you to Psychelia when you were just a wee one, did he not?" Tapper asked. 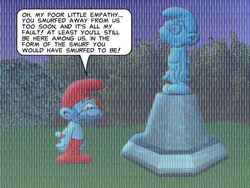 Empath was surprised of how much Tapper seemed to know about his friend's life. "That's what this smurf had seen in Papa Smurf's memories, Tapper," he said. "And then years later, he learned that this smurf was still alive, although this smurf didn't have any memory of Papa Smurf."

"If this so-called 'death' of you smurfed the rest of us together as Papa Smurf's children, Empath, imagine what the death of the Almighty's Son has done," Tapper said. "It was man who smurfed sin into the world and separated us from the Almighty, so it took another Man just like the first to die for the sin of the world so that we could be reconciled and smurfed back to the Almighty."

"This smurf is still not a savior, Tapper, and this smurf still doesn't want to be worshiped as one," Empath said.

"I will respect that, Empath, because I know Who is worthy of being worshiped above all beings, including yourself," Tapper said. "I'm just praying that you will come to know the Almighty through His Son."

"Did this Son ever feel rejected for being this 'only begotten' of the Almighty?" Empath asked.

"As the holy book says, 'He has no form nor splendor that we should regard Him, nor anything spectacular that we should desire Him. He is despised and rejected by men; a Man of pain, and knowing infirmity; a hiding of faces; being despised, we have esteemed Him not," Tapper answered. "'Truly He has borne our sicknesses, and carried our pain; yet we esteemed Him stricken, smitten by God, and afflicted. But He was wounded for our transgressions; He was bruised for our iniquities; the chastisement for our peace was upon Him; and with His stripes we are healed.'"

Empath winced at the mention of what was done to the Almighty's Son. "That doesn't sound like the Almighty liked Him as much as any other man."

"He was the beloved Son of the Almighty, Empath, which was what made what He had to do with Him painful but necessary," Tapper said. "Even when He was smurfing on the cross, shouting, 'My God, My God, why have You forsaken Me', the Almighty had to turn His face away."

"This smurf can't imagine Papa Smurf ever having to turn his face away from this smurf, Tapper, even when this smurf did something wrong," Empath said.

"Nobody likes to be forsaken, Empath," Tapper said. "Fortunately for us all, His Son smurfed from the dead the third day, with His disciples smurfing witness to His resurrection, and more smurfing to the faith because of the testimony."

"It's an interesting story, Tapper," Empath said. "It's just hard for this smurf to put faith in things that cannot be seen, unlike the Psyche Master."

"What you smurf in this world isn't eternal, Empath," Tapper said. "It's the invisible things that are smurfed by the Almighty that will last forever. Even this Psyche Master will have to answer for all that he has smurfed with the Almighty's creation, like all of us will."

"It's hard to think of this Almighty being so loving and yet also having to be the judge of everyone's lives, Tapper," Empath said.

"That's part of the reason He has smurfed us His Son, so that we will not smurf under judgment from Him," Tapper said. "His book says, 'Let this mind be in you which was also in Christ Jesus, who, being in the form of God, did not consider clinging, to be equal with God, but emptied Himself, taking the form of a bondservant, and coming in the likeness of men. And being found comprised as a man, He humbled Himself and became obedient unto death, even the death of the cross. Therefore God also has highly exalted Him and given Him a name which is above every name, that at the name of Jesus every knee should bow, of those in Heaven, and of those on earth, and of those under the earth, and that every tongue should confess that Jesus Christ is Lord, to the glory of God the Father.'"

Retrieved from "https://smurfsfanon.fandom.com/wiki/The_Only_Begotten_Son?oldid=77030"
Community content is available under CC-BY-SA unless otherwise noted.