"Virtual Smurfality" is a Smurfs fanfiction story that is part of the EMPATH: The Luckiest Smurf story series.

This was one of the few EMPATH: The Luckiest Smurf stories Vic George has written to follow the events of the novel. It was partly inspired by both the cartoon show episode "Papa's Day Off" and by the introduction of the holodeck in the Star Trek franchise starting with The Next Generation series. 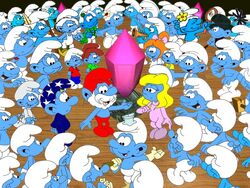 While the Smurfs try to deal with the dreaded "cabin fever" that besets them in the dead of winter, Empath and a few other Smurfs notice that Papa Smurf, Miner, and Handy have been bringing long pink crystals into the Smurf meeting house. Nobody knows what they are even doing with the crystals until the day Papa Smurf introduces them to his latest invention -- the Imaginarium.

Papa Smurf tells them that this Imaginarium does more than just let the Smurfs see whatever they can imagine (as Homnibus' Imaginarium does), but rather lets them interact with the very things they can imagine. To demonstrate that, Papa Smurf has the entire village imagine that they are at the beach on a warm sunny day -- and instantly they are transported into the reality of a beach on a warm sunny day! All the Smurfs except for Empath, Smurfette, and the Smurflings decide that they will spend the day inside the Imaginarium while Empath and his group of Smurfs spend the day skiing and snowboarding.

Retrieved from "https://smurfsfanon.fandom.com/wiki/Virtual_Smurfality?oldid=170691"
Community content is available under CC-BY-SA unless otherwise noted.