"Where No Smurf Has Gone Before" is a Smurfs fanfiction story that is part of the EMPATH: The Luckiest Smurf story series. It is an unofficial sequel to "The Astro Smurf" and "Dreamy's Pen Pals". 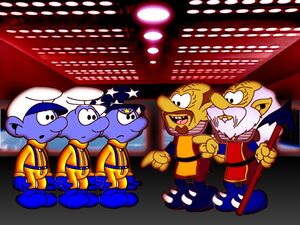 Empath and a few other Smurfs discover a spaceship that has crash-landed in the Smurf forest. Upon investigating, they discover it is being operated by a sentient computer that they call Flyro (an acronym for "flying robot", which is the computer's detachable form).

As Flyro assists the Smurfs in repairs on the ship, Dreamy makes an impassioned plea to travel to the stars on it. Although Papa Smurf and Flyro protest the idea at first, Empath convinces Papa Smurf to let Dreamy go on a limited test flight to the moon as long as Empath and Handy accompany Dreamy. No sooner after they take off and leave the atmosphere, though, than the three Smurfs and the spaceship get captured inside a larger spaceship being operated by a race of warrior beings called the Schliphargons. One of them, Heftargan, challenges Empath to a trial by combat to see if he is worthy to join their Talektharkon class of warriors.

Retrieved from "https://smurfsfanon.fandom.com/wiki/Where_No_Smurf_Has_Gone_Before?oldid=170704"
Community content is available under CC-BY-SA unless otherwise noted.